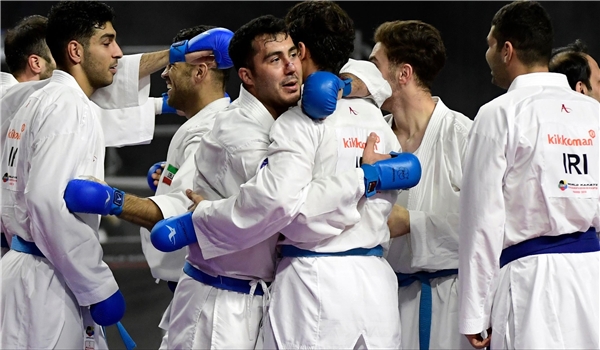 TEHRAN (FNA)- The Iranian men's Kumite team managed to finish second at the 2019 Karate1 Premier League in the Spanish capital city of Madrid after grabbing 2 gold and 2 Bronze medals.

In the men’s plus 84 KG category, Sajjad Ganjzadeh snatched the gold medal after defeating his French opponent 4-nil in the final.

Ganjzadeh had defeated his rivals from Spain, Croatia, Japan and Chile en route to final. Ganjzadeh also managed to seal a spot in next Summer Olympic Games.

Amir Mehdizadeh also bagged another gold medal for Iran in the men’s minus 67 Kg category. Meanwhile, Hamideh Abbasabadi and Saleh Abazari pocketed Bronze medals for Iran in the tournament.

Kazakhstan stood in 1st place with 2 gold and 2 silver medals while Turkey finished 3rd with 1 gold, a sliver and 1 Bronze medals.