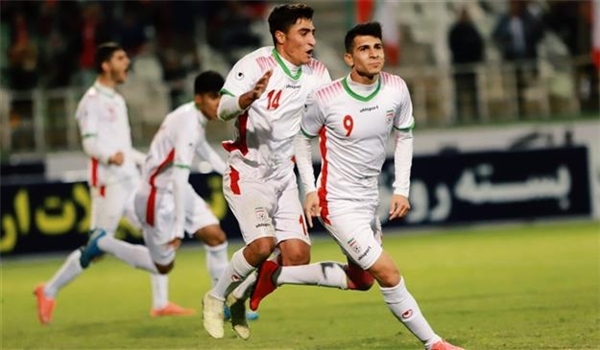 TEHRAN (FNA)- Team Iran handed a 2-0 defeat to the UAE to solidify its position atop Group D of the 2020 AFC under-19 Championship qualifiers.

The national Iranian U19 men's football team defeated Emirati national team 2-0 at the 2020 AFC U19 Championship Qualifiers on Sunday.

The Iranians took on the UAE in their third and final bout in Group D of the 2020 AFC U19 Championship Qualifiers at the Pas Ghavamin Stadium in Tehran on Sunday.

The match ended with a 2-0 for the hosts. With this win, Iran has now advanced to the final stage of the Asian championships atop its group with 9 points without a defeat.

The young Iranian football players had gained two easy wins against Kyrgyzstan and Nepal at their first and second matches.

In their first Group stage game, Iranians had defeated Kyrgyzstan 3-0.

Iran were held off to a goalless action by Nepal, but with 15 minutes left on the clock Alireza Monazzami broke the deadlock, before Ahmadreza Jalali doubled the lead in the 82nd minute.

Three minutes later, Monazzami rounded the keeper to complete his brace, and Aria Barzegar added a fourth just before the final whistle to put the icing on the cake.