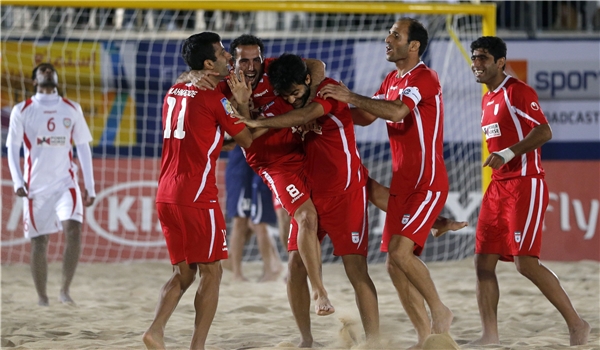 TEHRAN (FNA)- Team Iran registered a comeback against Russia in the 2019 Intercontinental Beach Soccer Cup in Dubai where the Iranians first conceded 2 goals but then managed to equalize and finally defeat their Russian rivals in penalty shootouts.

In the 2019 Intercontinental Beach Soccer Cup in Dubai, team Iran have edged out Russia in a marathon penalty shootout after a 3-all draw in regulation, to advance to the semi-finals of the tournament as the top seed.

Russia took the lead in the opener with a spectacular rocket shot from their keeper, and came up with a second one in the middle time-frame to provide a 2-goal cushion.

Iran struck back through first Amir-Hossein Akbari, and then with 18 seconds remaining to the 2nd period Ali Mirshekari who scored the equalizer to level the game at 2-all.

In the 3rd period Iran moved up through Mehdi Shirmohammadi, but the Russians cancelled it from the spot to send the match into the penalty shootout. That was where Iran delivered all the attempts and Russia missed the last one to fail on the task.

In the semi-finals, Iran will meet host nation the UAE on Friday, while Russia will play with Spain.

Back in December 2018, a world rankings released by Beach Soccer Worldwide (BSWW) showed Iran's national beach soccer team was the second best team in the world, having moved up one position and overtaking Portugal’s place.

As far as Asian teams are concerned, Iran tops the ranking with a significant difference in total points. Japan, United Arab Emirates and Oman hold Asia’s ranks of two to four with 1,083, 969 and 633 points respectively.